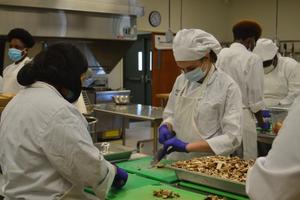 Culinary arts students at the Golden Isles College and Career Academy have perfected the art this year of preparing a meal for hundreds.

Their successful Take & Bake program, organized as a way to give the students experience preparing meals for the community while adhering to pandemic precautions, has served 1,209 meals so far. Each meal purchased feeds four people.

“We’re really hard workers, and we enjoy what we do,” said Jackelin Gonzalez, a freshman culinary student at GICCA. “It’s our passion, and the food’s good. We have some great teachers who teach us how to make the food.”

The students spend several class days preparing the meals and packaging them to be distributed.

Preparing the meals, which have included lasagna dinners, chicken pot pies and tacos, has been an especially effective educational tool, said Chef Haley Meredith, one of the culinary pathway instructors.

“There’s so much repetition, and that’s really how they learn,” she said. “In real life, when you’re working at a restaurant, you’re going to do the same thing every day, so you get really good at it.”

In a culinary class like the one offered at the Career Academy, though, students spend more time learning how to prepare one kind of dish at a time. But with the Take & Bake meals, they’re spending more time in the kitchen honing their skills.

“These guys, they’ve got a bin of onions to chop. They’re chopping onions until they get it right,” said Laura Bersticker, a culinary pathway instructor.

Jalen Meyers, a junior culinary student, said he’s learned a lot this year about preparing food for large groups. He encouraged the community to support the next Take & Bake sale.

“It’s a spiral ham — everybody likes a ham,” he said. “And it’s good for you. It’s heart healthy, and overall it’s just good.”

“I love all my teachers out here,” she said. “They’re awesome.”

“They’re probably better at knife skills than any of the other kids because they’ve been able to do meals for a thousand people,” she said.

Money raised through the sale will benefit the culinary arts program.