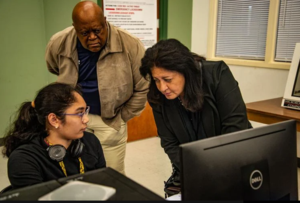 A small group recently traveled a long way — across an ocean and a country — to visit the Golden Isles College and Career Academy.

The delegation from Hawaii toured the career academy, met instructors and students and tried out some of the various lab equipment.

They didn’t travel more than 4,500 miles only to walk the halls of GICCA. The trip to Glynn County followed a National Career Academy Coalition conference in Atlanta earlier this month.

“I’m originally from Glynn County,” said Barry Harris, an educator who traveled with the delegation. “I live in Hawaii now, and I’ve lived there about eight years. After a few years out there, I started working at Castle High School, which is a prep school in the area, and we started a career academy.”

The career academy at James. B Castle High School on Oahu is contained within the high school’s campus unlike GICCA.

The local Career Academy is housed in a large facility on Glynco Parkway and features a variety of labs for numerous pathways, including culinary, engineering, construction, vehicle repair and more.

“Because I still have connections here and I knew this delegation was coming to the conference in Atlanta I said, ‘Hey why don’t we get together and come down to the career academy here,” Harris said.

The six-person group drove from Atlanta to Brunswick and spent a couple of days visiting GICCA and Glynn Academy, where they learned more about how Glynn County Schools handles work-based learning.

They happened to be on campus the day GICCA hosted a ribbon cutting for its new heavy equipment simulator. The ceremony had been delayed due to a hurricane threat the week before.

A similar approach is taken at the Hawaii school, although some of the industry needs are different. A lot of attention is also paid to students’ learning interests, he said.

“We start to design programs around that,” he said.

Each community’s version of a career academy has to meet a unique set of challenges based on the needs of residents, said Bernie Tyrell, principal of Castle High School.

“The challenge of living in Hawaii is there’s such a high cost of living, so it’s really making sure that we’re looking at the high demand, high wage, high skill jobs to prepare our students to be able to make a livable wage and to be able to have the lifestyle that they want,” she said. “We also want them to stay in Hawaii because a lot of them will move if there’s an opportunity.”